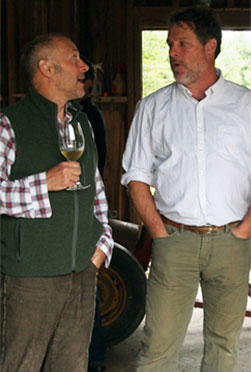 Rosemont Market & Bakery was born in 2005, from parents with long and varied experience in the world of food. Co-owners Scott Anderson and John Naylor worked together at the beloved Portland Greengrocer for ten years. Before that, Scott cooked at Back Bay Grill, after years cooking in France and Switzerland. John cut his teeth in the food world buying and cutting fish, eventually opening the Grouper Cafe, a restaurant he co-owned in Mt. Kisco, New York.

Rosemont began as one cozy store on Brighton Avenue. In the early days, we were five people. Today we employ more than 100 people. We have a 7-day/week bakery and kitchen, six markets in neighborhoods in Portland, Cape Elizabeth, Yarmouth, and Falmouth, and our “Mothership” headquarters which distributes to our markets and wholesales to restaurants. We also offer island delivery for our customers on the Casco Bay Ferry route.

We are committed to growing intelligently while retaining the feel of those smaller, simpler days. We think we’re doing pretty well with that.

Everyone who works for Rosemont loves food, and loves the conversations about food that pop up continually in our stores. The guy behind the deli counter can’t wait to tell you about the farm and feed a particular animal was raised on and how best to serve the cut you choose. The gal serving cheese knows the difference between Brie de Meaux and Camembert. The employee helping you find the perfect wine to serve with dinner is happy to tell you all about the small producers in a wine region they’ve visited.