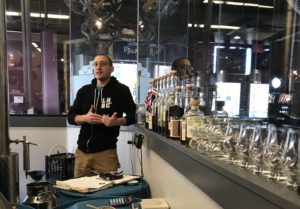 Eric Michaud was at a turning point. A few years into co-owning and helping run Novare Res, Portland’s 10-year-old (!) beer institution that has become internationally famous for its boundary-pushing selection, passion and guidance, the Yarmouth native was missing something.

Novare’s brilliance lies in finding, promoting and explaining beers from all over the world, which express something meaningful about fermentation’s centrality to authentic cultures. But Eric realized that he had no active hand in making any of what Novare Res sold.

“I wanted a place,” he told us, “where I could make anything I wanted.”

That’s what Eric told a lucky dozen Rosemont employees during a recent visit we made to Liquid Riot Bottling Company in downtown Portland. We were there because we love Liquid Riot beers, and wanted to learn more about how and why they do what they do — so that we can tell you about it, both here and in our stores.

Since young adulthood, Eric told us, he had traveled the world — India, Germany, the United Kingdom, Japan — and was fascinated by the brewing and fermentation communities he found. 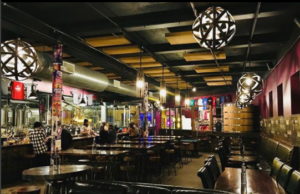 Inside the downtown Portland Brewery Resto-Bar, with Eric’s brother decorated and furnished with nearly entirely by reclaimed materials.

He interned at a Trappist brewery in Belgium, and then for a full year as a rare Westerner in a Japanese sake brewery. Each new experience increased his desire to share what he was finding with his home communities in southern Maine, and led to Novare Res. Time spent in southern Germany showed him how the best breweries rarely made only beer, but also distilled spirits as well as offered an inn and restaurant; this helped forge his hospitality-centered vision for Liquid Riot.

The maker itch had to be scratched. At Liquid Riot (which began as In’finiti before a host of trademark conflicts led Eric to take the high road and change its name), “We can make everything here. Not only all our beers and distilled products, but soda syrups, bitters, food.”

Liquid Riot’s perspective is part DIY and part what might be called DIT: Do It Together. Eric couldn’t stop enthusing over the open spirit of sharing widespread throughout Maine’s robust brewing culture, but he also explained how thoroughly the facility is a family affair. Eric’s brother did all the carpentry and lighting fixtures at Liquid Riot’s dramatic restaurant, from mostly reclaimed local materials; his brother-in-law does the bonkers can art; his father helped with the build-out. 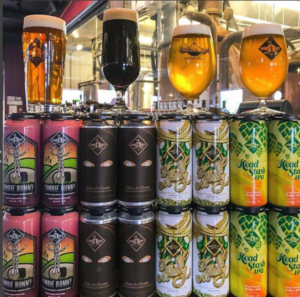 The beer perspective at Liquid Riot is internationalist, catholic, big-picture. There are 16 taps active at any one time (overall, sales are roughly 60 percent on-premise, 40 percent sold at retail), representing the learned staff’s love for everything from Belgian to British to German and beyond. In the past year alone, Eric told us, Liquid Riot registered 110 different labels!

Most breweries use only two or three different yeast strains; Liquid Riot uses dozens. Wild yeasts — Lactobacillus, Brettanomyces and many more are active and prevalent at the brewery — are extremely important to Eric and his staff. Most brewers who are geared toward high, consistent production buy fewer varieties of grain, even when they produce many beer styles. Liquid Riot sources grains from regions all over the world, targeting each toward the region and style that inspired the particular beer. The German-built brewery has a relatively small 10-hectoliter capacity, and produces only 260 gallons per batch.

The barrel room, home to vessels that previously lived for Bourbon, wine, Sherry, Port, and tequila, has seen increasing use lately, too. One of the highlights of our visit was getting to taste the extraordinary God of War and Walter Wit straight from barrels, and then having Eric explain how they’ll develop in the coming months before canning, bottling and tap release.

There’s also Liquid Riot’s distilling wing, though Rosemont is not permitted to sell the products. (But hell yeah we got to taste them!) These are super high quality, all made from only domestic grain, as much local as possible. “Historically,” Eric told us, “Scotch, for example, was a way to make magic out of, honestly, pretty crappy initial raw material. We’re trying to make magic right off the bat, with high-quality grains and meticulously clean, precise processes.”

For those, as well as a broad and ever-changing selection of exceptional beers (and, by the way, really terrific food), you’ll need to head down to Liquid Riot itself on Commercial Street. But make sure to pick up some great canned brews at any Rosemont Market, and ask us to tell you more about this wonderful family business that has contributed so much to the area’s culture. 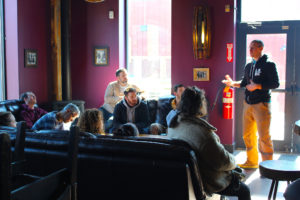 Eric telling his story to the Rosemont Crew 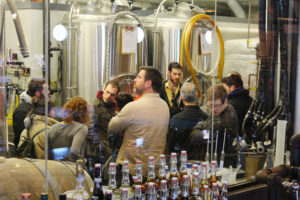 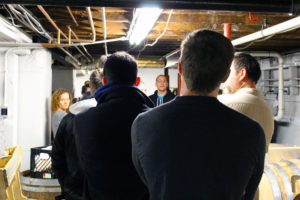 A look into the barrel room